Is glucophage effective on weight loss in non-diabetic individuals with obesity? 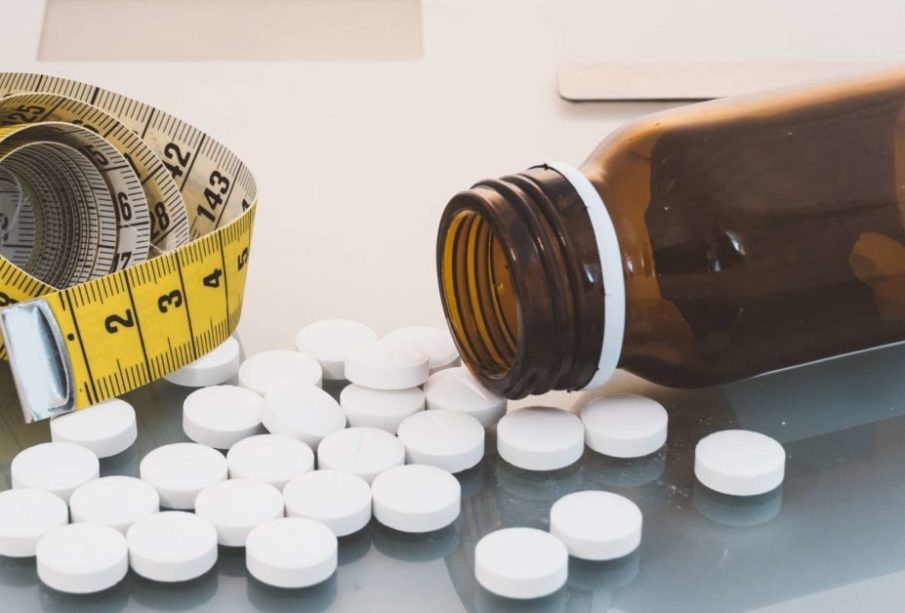 Glucophage is the brand name of an oral anti-diabetic drug known as metformin. It is often prescribed for type 2 diabetic patients along with diets and exercise to control the blood glucose levels. Sometimes, it may be combined with insulin or other medications. However, Glucophage is not used to treat type 1 diabetes due to the different underlying mechanisms. Type 1 diabetes is due to an absence of insulin production by the pancreas. Without insulin, cells cannot take in glucose. Type 2, on the other hands, has the presence of insulin, but cells are less sensitive to the hormone. As a result, body signals the pancreas to produce more insulin. When the pancreas can no longer compensate for the excess demands of more insulin, blood glucose elevates persistently. This condition is called insulin resistance. Patients may have insulin deficiency due to exhausted pancreas. Glucophage is excellent for type 2 diabetes as it works by increasing insulin sensitivity, decreasing glucose production from the liver and decreasing intestinal absorption of glucose. All of these actions lead to reduced blood glucose and less intense glucose fluctuations, thus lowering blood vessel injury and risk of diabetic complications.

Glucophage, or metformin has been the drug of choice in medical treatments for type 2 diabetes. This is because it has many added benefits and minimal side effects such as nausea and vomiting. Better still, the side effects can be easily mitigated by taking the tablets with or after the meal. In addition, glucophage does not cause hypoglycemia (low blood sugar that can be harmful), as compared to an anti-diabetic drug-like sulphonylurea. Glucophage is also safe for pregnant and lactating mothers. It is widely available and inexpensive. Furthermore, studies found that glucophage may have a role in preventing cancers like breast, colon, lung, pancreatic and prostate cancer. By controlling blood glucose effectively with glucophage, patients have a reduced risk of developing these cancers. The only downside of glucophage the contraindication for patients with kidney failure since the drug is excreted by kidneys. Nontheless, one of the best added benefits of glucophage is it causes weight loss in type 2 diabetic patients. This is great since diabetic patients are often obese or overweight. According to the April 2012 Diabetes Care study, the average weight loss on glucophage after a year is 6 pounds, or 2.7kg in diabetic patients. Although glucophage is not a miracle pill for rapid weight loss, it has been shown to help diabetic patients to lose weight. But is glucophage an effective drug for weight loss in non-diabetic indiviuduals with obesity?

Obesity is a real problem. It is one of the contributing factors to diabetes itself. In fact, obestiy in non-diabetic patients is associated with insulin resistance. Hence, improving insulin sensitivity may account for weight loss, although the exact mechanism is still unclear. In 2013, a study was conducted on the “Effectiveness of Metformin on Weight Loss in Non-diabetic Individuals with Obesity”. In the study, a total of 159 patients who were obese or overweight (with body mass index more than 27kg/m2) were recruited and treated with outpatient metformin therapy. The patients did not have diabetes and were not on strict diet programs or lifestyle changes and exercises. Prior treatment, their insulin sensitivity was measured and a dose of 500mg metformin was started. Over time, dosage was increased until final dose. Additionally, 45 untreated patients were recruited for comparison. Both groups had their weight changes recorded and analysed over 6 months. The results revealed 16.2% of treated patients had a weight loss of 10% or more, and 47.4% of them had a weight loss of at least 5%. On average, the overall weight loss during 6 months of treatment was about 5.8kg. Interestingly, patients with severe insulin resistance lost significantly more weight than insulin sensitive patients. Meanwhile, the untreated patients had gained about 1kg on average. The study therefore concluded that metformin is an effective drug to reduce weight in overweight or obese non-diabetic patients.